*TRIGGER WARING* – Review of an airsoft brand!
I have a thing about hats.  I wear a hat pretty much every day.  Imelda Marcos had shoes, I have hats.  I particularly like baseball caps.  The drawback I have always found is that after a while my head gets too hot.  Some of the places I work are very hot and I need to be able to protect my head from the sun and I need a peak that can shade my eyes, but I don’t want my head to overheat.
So, I went looking for a hat that was a bit different.  I was also looking for a hat in a plain colour because I like to wear neutral colours when I am working.  I also don’t like to wear bright colours when I am out and about in the woods or on the hills as I don’t like to jar with nature.
One of the hats I already have is a so called “truckers cap” where most of the crown is made from mesh and is very cool to wear.  I saw something similar from a US manufacturer on Soldier Systems being sold as an “operator cap”.  I quite liked the look of it so I went to their website.  Given the places I work and the level of my ability to lose stuff I was not prepared to pay what they were asking plus delivery….
Enter the Condor cap.  One quick google search later I found the Condor Mesh Tactical Cap.  So what makes it tactical?  Firstly, the range of different camouflage patterns.  If it’s in Ghost Recon Wildlands they have it!  Secondly there are Velcro patches all over it to stick morale patches to.  Finally it doesn’t have one of those annoying buttons on the top that would dig into your head if you wore a headset or ear defence over it.
Frankly none of the above were of any interest to me, especially as I was buying a plain coloured cap.  At £12.09 delivered I was prepared to take a punt on it.  I was very pleasantly surprised. 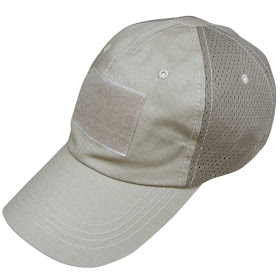 The hat is actually very well made.  All of the stitching is very neat, straight and uniform.  I was expecting lose threads to be hanging off all over the place, but there were none.  All of the internal seams are flattened and covered with a fabric tape to prevent any rubbing.
The peak and the front panel are made from a decent poly cotton fabric.  The remainder of the hat is made from a mesh which is slightly darker than the other fabric.  The Velcro patches are the same colour as the mesh.
When I got my hat, the Velcro was plain, but a look at Condor’s website shows the front patch to have a bloody great big Condor logo on it.  Whether this is the case when you actually get the hat or it is photoshopped on to stop the images getting nicked for Ali Baba, I couldn’t comment.
The next feature I really liked was that the patches were all sewn on after the rest of the hat had been made.  This meant that I could remove them without destroying any of the other seams on the hat in the process.
Working abroad I prefer to be the grey man, as much as a pale white bloke can be, so ally morale patches are not my friend.  That said, if you are military or perhaps an armed security contractor a patch on a cap would be a good place to conceal some SERE kit like a handcuff key or shim. 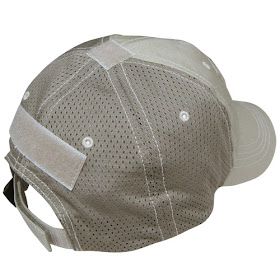 In terms of fit it was very good.  I have a 58cm head, which is about average.  For my head, I didn’t need to make much adjustment to the back.  If you were to leave yourself 10mm of overlap on the Velcro you could take this up to a 65cm head.  Likewise you could take it down to a 51cm head, although it would bunch up a fair bit at the back.
The crown isn’t overly large either.  Some caps have so much fabric on the crown that you look like your head is misshapen or the cap sits on the top of your ears, which is uncomfortable.  This hat fits nicely to the whole of my crown without coming down too far.
The peak is a decent width and length.  It provides shade to the eyes very well and there is no issue wearing it with sunglasses or eye-pro.  I regularly wear it with a pair of Wiley X SG-1s and have no issues.
If you’re into having a back-pocket crease, like I am, the peak will take and hold it with no problem.
Where Condor makes these hats in all of the different flavours of camouflage patterns, they only use genuine fabrics such as Crye, Kryptek and A-TACS.  Also, clearly the fabrics are not IRR coated, although I cannot see that this would be an issue, even Hereford use fabric softener on their kit so the coatings are normally destroyed the first time the kit is washed! 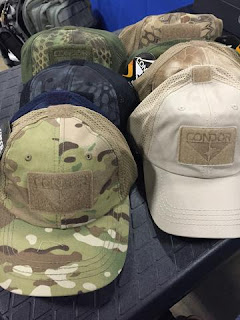 I have recently retired mine, mostly because my missus claims the smell of it makes her eyes water…  I wore it nearly daily for the best part of 3 years and it never let me down.  The colour has never faded significantly, although that could have been because of the dirt.  There was some fraying along the front edge of the brim but that just added character!

In summary, I would say that if you want a really comfortable and cost effective baseball cap to wear in the field, on the hills or even in a pub beer garden I would go for one of these hats without hesitation.  In fact, my replacement I have just ordered is the same hat, but in the new brown colour.